World War III is already well underway. Red Dawn wasn’t just a masterful cinematic piece of theatre, but rather advanced warning of a plan decades in the making to take the United States down as the international communist conspiracy moves forward with their plans to establish a new world order en route to creating a one world government under the ideological umbrella of the socialist worldview. Today, the United States remains the last free nation on the planet, but the global world elite have collectively devised a strategy to bring an end to American exceptionalism once and for all. The United States is in very real danger of suffering a similar fate to the once great nation of Rhodesia, a country which no longer exists after United Nations intervention and a brutal Marxist inspired guerilla bush war, supported by both Chinese and Russian backed terrorist factions, ultimately brought Rhodesia to her knees.

Interestingly, according to July 24, 2020 Tom Black YouTube video titled, “Dangerous Secret China Military Found in Canada,” a seemingly unbelievable but true report has surfaced of foreign troops operating on Canadian soil. “Joe Clemente will never forget the day it looked like the military landed on Salt Spring Island,” explained the reporter for CTV News in Surrey as they replayed the incredible video recording of the incident back to their viewership audience. “Not a lot of things shock me,” said Clemente. “But that did shock me.”

“Kathy Weisner will never forget the day: March 17, 2018,” writes David Malko in his July 20, 2020 CTV News article titled, “'It's almost like a mystery novel': Investigators say Surrey murder victim worked for 'Golden Touch'.” According to the report, “At the foot of her driveway, she says, were roughly 50 young men and women in military fatigues. They were wearing matching caps and combat boots, lined up two abreast, and appeared to be training. They weren’t carrying sidearms, but their “commander” was yelling instructions in a language that wasn’t English, Weisner says. ‘My heart stopped,’ Weisner remembers. ‘I just basically ran for the house and called my husband.’ A week later, Joe Clemente had a similar experience while driving home from work along typically tranquil North End Road."

To add to this troubling report out of Canada, according to a November 8, 2018 Concienciaradio YouTube video titled, “Illegal Immigrants March Through Mexico City, Headed to UN,” journalist Alex Backman reports, “Now you see, Mexico already sold itself to the left as we can see. Russia has also said that it’s going to invest heavily in Mexico in its new airport. They’re going to open up at least ten maquiladoras for military production in Mexico, one of them in Mexi-Cali Baja, California,” said Backman.

“Ten percent of what is going to be produced in Mexico is going to be given to the Mexican military. Also, no taxes," said Backman. "Free of taxes for the Russians and Mr. Putin is going to build his military factories; they’re going to build migs and tanks and armored vehicles in Mexico. So, the military invasion that Russia would probably do doesn’t have to, you know, involve bringing all of its military transport from Russia all the way to the Americas, now they can just quickly manufacture it down in Mexico,” Backman explained. 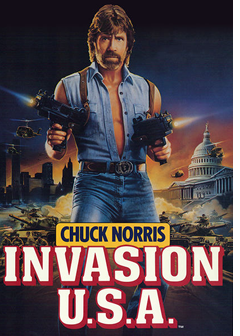 “In 2009, a truck driver contacted me. He was coming through Guatemala into Chiapas at Tapachula and he stopped to take a leak on the border. And this is the real deal, I’m not kidding you," explained Backman with an obviously troubled look on his face.

"I talked to John Moore about this, I was even on his show talking about this. And Jerry Corsi knows too, from WorldNetDaily, so I spoke to him about it too. He saw, as he was taking a leak on the side of the road, he went into the jungle, you know? And he saw thousands and thousands and thousands of tanks, okay? They had a red star on them, I don’t know North Korean, Chinese or Russian but they are here and they are planning an invasion," warned Backman. "So, I’m just putting that out there so you know that is coming down the line."

And if that wasn’t enough to get your attention, according to his November 24, 2018 YouTube report titled, “Spokesperson for Caravan Speaks Out,” Backman goes on to cite a November 23, 2018 Televisa News report where a caravan spokesperson was quoted as stating that, “We want to reach an agreement with Trump. Because if not, that day in Guatemala…,” warned the spokesman before being cut off by the Televisa reporter who stated that, “He already made it clear and he will not let them enter,” said the reporter. “Well yes,” replied the caravan leader. “Like I said, he cannot come against us. He cannot fire against us. Because I believe tomorrow a really strong nation is coming to support us." When pressed on exactly which country is coming to support them, the caravan leader replied, “Russia is coming. They are coming.”

“I spoke with somebody inside, a former spec-ops, Mexican military spec-ops, special operations soldier,” explained Backman in his May 30, 2019 YouTube follow up report titled, “Caravan News Update with Alex Backman "The Intercontinentals" - The Russians are Coming May 30 2019,” According to the report, “He told me that there is a massive amount of Russians piling up at the border between the United States and Mexico in the state of Senora which is across from Arizona and in the state of Chihuahua right under New Mexico. Russians. Oh, and they’re not civilian,” warned Backman.

Information, which if true, would put a new perspective on the estimated 5, 200 troops deployed along the US-Mexican border according to a March 23, 2020 Los Angeles Times article titled, “U.S. troops remain at southern border despite waning migration, as coronavirus spreads elsewhere.” According to the report, “The United States is in a state of emergency, with thousands of active-duty military and National Guard troops deployed — and not because of the coronavirus.”

“We’re getting overrun and the danger is increasing,” says Sheriff Larry Spence in an August 8, 2014 Daily Mail article titled, “’We’re getting overrun and the danger is increasing…we need to open our eyes’: Sheriff leading probe into murder of Border Patrol agent claims armed illegal immigrants in military fatigues have been spotted on Texas ranches.” According to the report, “Ranchers with land 25 miles north of the border have reported groups of men - believed to be illegal immigrants - walking single file, through farm land in military fatigues. Some were armed with rifles,” writes author Will Payne.

With numerous caravans comprising of thousands of refugees setting out from various Central and South American countries in route to illegally storming the United States border, a long rumored plan for the continuity of government operations in United States, known as ‘Operation Cable Splicer,’ begins to emerge from the annals of internet rumor and conspiracy theory to increasingly beginning to sound like conspiracy fact.

“Operation Cable Splicer,” according to a Sourcewatch.org report, “is a subprogram of the Rex-84 program, which was established on the reasoning that if a 'mass exodus' of illegal aliens crossed the Mexican/US border, they would be quickly rounded up and detained in detention centers by FEMA. Rex-84 allowed many military bases to be closed down and to be turned into prisons."

This information is in addition to a March 27, 2020 Military Times article titled, “After Trump’s order, DoD reviewing how many Guard, Reserve troops to bring back for COVID-19 fight,” where it was reported that, “Trump’s executive order allows for the call-up of up to a million troops for no longer than 24 consecutive months, but Pentagon officials don’t have a projected number of expected activations, Hoffman said, adding that the Defense Department ‘is now fully authorized to make activations as needed’ and ‘will provide updates as they become available.’”

With reports of trains carrying military equipment across the United States amid backlash from the Democratic party in opposition to the presidents plan to build a border wall between the US and Mexican borders, a completely new perspective on the lefts incessant coup d’état attempts against the Trump administration begins to emerge. Their numerous, unfounded attempts to undermine the will of the American people in attempting to overturn the results of the 2016 presidential election, an election by all accounts president Trump wasn’t supposes to win, increasingly beginning to look more and more like a foreign government aligned plot to overthrow the United States government from within. Treason.

Today, the United States remains the last free nation on planet Earth but with the encroachment of scientific socialism into the lives of millions of Americans as nationwide lockdown orders threaten the very liberty and freedom separating Americans from the rest of the world; American exceptionalism is at a precipice. The results of the 2020 presidential election literally determining the fate of the free world as a battle between the freedom and certain tyranny goes head to head. The New World Order knocking at Americas doorstep, threatening a new normal en route to destroying the United States from within as America parallels a path formerly walked by Rhodesia, a once great nation which no longer exists due to an internationally backed Marxist insurgency and United Nations sanctions which ultimately brought the country to its knees in eerily similar circumstances to the plight of the United States today where fourth generation and asymetrical warfare tactics are being used against the American people en route to ensuring that World War III is already well underway.