Performance Enhancing Drug Policy Ahead of Pacquiao/Thurman Fight Under Scrutiny

Manny Pacquiao turned back the clock Saturday night, capturing Keith Thurman’s WBA super welterweight title in route to a convincing, though curiously split decision victory. The previously unbeaten Thurman, 10-years Pacquiao’s junior, was schooled by the legendary Filipino boxer who was the smaller, but faster and more aggressive fighter in the ring. It was a brilliant performance by Pacquiao, leaving many considering the possibility Pacquiao could still compete with the sports very best including a rematch with the retired, 50-0, Floyd Mayweather Jr.

“Testing administered by the Voluntary Anti-Doping Association didn’t begin until Pacquiao and Thurman were well into their training camps for their WBA welterweight title fight Saturday night at MGM Grand Garden Arena,” writes Keith Idec in his July 17, 2019 boxingscene.com article titled, “Thurman: PED Testing For Pacquiao Fight ‘Was Never A Big Issue’.” “Thurman told BoxingScene.com on Tuesday that he would’ve welcomed comprehensive testing sooner than it began for this fight, but he isn’t suspicious as to why that didn’t happen,” according to the report. 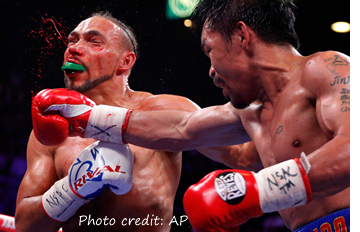 While Thurman may not be suspicious, legendary boxing trainer Teddy Atlas has found the entire situation perplexing. According to a June 20, 2019 social media posting from the famed ESPN analyst, “With the plus 100-degree temps everywhere, I get the uptick in iced tea stands… but I’m still confused with no VADA testing for this fight.” Later, Atlas would go on to note that, “It’s only the dressing room but Manny looks good, fountain of youth? Just for Men Hair? See soon.”

Just from a simple open source analysis of various data points one comes away the notion something wasn’t quite right here. What exactly, these pundits fail to say though they seem to be leaving a trail of crumbs for the reader to come to their own conclusions. It has been my contention that an inordinate amount of out of the ordinary, head scratching measures seem to haunt Manny Pacquiao throughout his career. Some of which work out in his favor, others which do not. The common thread in these chains of unusual, out of the ordinary circumstances and events seems to be Pacquiao himself however.

VADA, or Voluntary Anti-Doping Association, is a stringent form of performance enhancing drug testing that puts the athletes under an intense microscope with irregular, but consistent testing of the athletes at often times at the inconvenient times of the day and night. Without VADA testing, athletes have more freedom to use a wide array of performance enhancing substances that would otherwise flag them under traditional VADA guidelines. The fact VADA wasn’t used in the Pacquiao vs. Thurman fight until the later stages of their training camp is simply smoke indicating there is a fire nearby.

“In a bit of a puzzling move, the Voluntary Anti-Doping Agency (VADA) won’t be handling drug testing for Manny Pacquiao’s July 20th bout with Keith Thurman. Instead, the Nevada State Athletic Commission (NSAC) will take charge,” writes Bad Left Hook’s Patrick L. Stumberg in his June 24, 2019 article titled, “NSAC, not VADA to handle Manny Pacquiao-Keith Thurman drug testing.” To explain exactly how puzzling of a move it really is, consider the exact opposite scenario unfolded in mixed martial arts back in 2013 when Georges St. Pierre, not satisfied with the existing measures already in place, insisted on VADA testing in the leadup to his fight with challenger Johny Hendricks. According to reports, Hendricks advocated for the testing to be done under the traditional auspices of the NSAC instead and negotiations ultimately stalled as a result according to a November 13, 2013 bloodyelbow.com article titled, “Johny Hendricks goes off about WADA/VADA testing and Georges St-Pierre before UFC 167.”

In a sane, rational and just world if performance enhancing drug use was truly frowned upon in the sports entertainment industry the NSAC and every other sanctioning body would implement the most stringent of testing policies for all athletes and events across the board. Instead, upon examining the actions of these governing bodies overtime we find a distasteful display of impropriety, hypocrisy and inconsistencies across the board that leave their actions and decision making very much open for scrutiny.

Teddy Atlas has called for a national boxing commission, highlighting the long train of dissatisfaction permeating boxing that has led to the frustration of so many boxing purists. The ridiculousness of the current state of existing affairs alone attests to the need for some kind of legitimate oversight body, though unless its staffed by some real junk yard dogs with the ability to administer justice with the interest and integrity of the sport in mind a national commission would ultimately prove just as corrupt and inept as the currently existing infrastructure already in place.