Colby Covington made the most of his WWE inspired walk out Saturday night, dominating former undisputed UFC welterweight champion Robbie Lawler in front of the Newark, New Jersey Prudential Center crowd. Covington walked out to professional wrestling legend Kurt Angles theme song “Medal,” enjoying the same chants of “You Suck” from the ruckus crowd as he made his way to the cage as Angle has throughout his storied career. Covington’s ability to transcend the sports entertainment industry apparent from the very beginning of the main event.

It was immediately clear from the weigh-ins Friday afternoon that Covington was the smaller man, physically he looked more like an endurance athlete than a body builder. In contrast, Robbie Lawler is a powerfully built individual and nowhere was that more evident than when the referee Keith Peterson had the fighters meet in the center of the Octagon for their final instructions. Which begs the question, exactly how much weight does Robbie Lawler actually cut? The bigger man in the cage, it was obvious if Covington couldn’t weather the storm early it was going to be a short night for the former interim champion. And right off the bat, Lawler looked to bulldoze Covington right off the map. 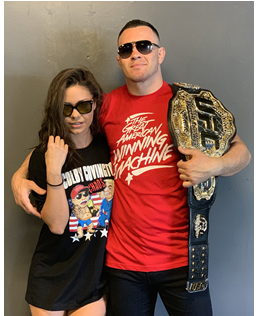 Unable to put Covington away early, Lawler was slowly dragged into deep water by the end of the first round after Covington cut off the cage, trapping Lawler’s back against the fence where a relentless pace was put on the former reigning 170-pound welterweight champion that ended up sapping the bite out of Lawler early on. By the time the former Miletich Fighting Systems pupil made it back to his feet, he was noticeably tired with a very aware Covington motioning to Lawler to bring it on.

Former training partners, Covington no doubt knew Lawler was most dangerous in the early stages of the fight and that if he was outworked in the grappling department would become much less dangerous as the fight went on. Despite the first round being a virtual grappling clinic from Covington, it was an entertaining affair to see such high-level wrestling and conditioning on display from Covington. It was a clear 10-9 round for the American Top Team representative from Coconut, Florida. In between rounds, Lawler could be seen noticeably winded, likely due to the incredible pace Covington was putting on his veteran opponent.

In a story that would play itself out for the remainder of the night, Covington would push the pace on on an exhausted Lawler in round two, expertly mixing up his boxing and Muay Thai striking techniques with a relentless pursuit of the takedown against the fence. Covington was all over Lawler like white on rice, though confident and proficient looking in the stand-up department. The ace up Covington’s sleeve, his incredible conditioning that enables him to continuously perform at a high level while his opponents begin to slow.

By the tail end of the second round Lawler was hesitant to pull the trigger, stationary at times and less mobile than in the first though still displaying some kind of head movement despite fatigue obviously beginning to set in. Lawler was getting pieced up by the fresher Covington who essentially had a living, breathing heavy bag in front of him. It was another clear cut 10-9 round for Covington who was well in control of the fight by this point. Colby Covington was out striking Robbie Lawlor, leaving fight fans around the globe silent and in shock as the notorious heel Covington was putting his money where his mouth is.

The crowd noticeably in support of Lawler, the fight would primarily play itself out on the feet throughout much of the third stanza with Covington running a clinic on the gassed Lawler. Stalked by “Chaos,” Lawler’s face was busted up as the horn sounded marking the end of yet another 10-9 round for Covington. Complete dominance by the former interim welterweight champion as Lawler had no answers for his fresher opponent.

Marking the beginning of the championship rounds, the fourth round would primarily play out on its feet with Covington pushing the pace and having plenty of zing left behind his punches despite it being deep into a grueling and exhausting fight. It was an absolutely phenomenal display of conditioning from Covington, the kind of stuff that separates the boys from the men. Looking quite comfortable on his feet, Covington was content to stand and trade with Lawler throughout much of the fourth before finally dragging Lawler down to the mat with just under two minutes remaining in the round.

Lawler would again make his way back to his feet, as the two worked against the cage jockeying for position. Finding their way to the center of the cage, Covington would once again back Lawler up with his cage generalship as the fourth round came to a close. It was another clear cut 10-9 round for Covington.

The fifth round would prove to be little different, as the battle of two southpaws would again primarily playout on the feet with Covington ultimately getting the better of the exchanges with a solid jab and numerous front kicks to keep distance. Covington had employed his wrestling early in the fight to sap the wind out of Lawler’s sails and then proceeded to out strike the former champion in convincing fashion. Interestingly, Lawler would appear to get his second wind in the closing minutes of the fight, bobbing and weaving his way in to attempting a big shot but it was too little, too late as Covington would again take the fifth round by a score of 10-9.

“Let’s talk about the lesson we learned here tonight,” said Covington during his post-fight interview with UFC sports commentator Jon Anik following his unanimous decision victory over the former reigning UFC welterweight champion. “It’s a lesson Matt Hughes learned: You stay off the track when the train is coming through.” Some felt the comments were in bad taste, but according to bloodyelbow.com Covington has no regrets. Hughes, one of the greatest UFC welterweight champions of all-time and longtime confidant of Robbie Lawler, was unfortunately involved in a train accident in 2017 that nearly took his life.

Following his unanimous decision victory, Covington was confronted by the champion Kamaru Usman in the post-fight telecast with ESPN where the two exchanged barbs. An unfortunate look for Usman on a televised broadcast, Covington was the more composed of the two fighters as an animated Usman was held back by security in plain sight on camera as the spectacle unfolded live and uncut for the entire world to see. This is the modern face of the sports entertainment industry, where the scene is set: And signed, sealed and delivered live and on demand for the publics viewing pleasure.