“There was reason to believe that the Greg Hardy hype train was about to come to a halting crash,” writes MMAFighting.com’s Alexander K. Lee in his July 22, 2019 article titled, “Greg Hardy riding high after UFC on ESPN 4 win: ‘I told you so’.” According to the report, “But that wasn’t to be as Hardy made short work of Juan Adams on Saturday night at UFC on ESPN 4 in San Antonio, Texas, scoring a TKO victory in 45 seconds against “The Kraken.” The fight started off with the two exchanging jabs, Adams appeared to get the better of the early exchanges though he didn’t escape unscathed himself.

Unfazed, Hardy continued to press the action, switching between plodding footwork indicative of setting up for a big shot and being active on the balls of his feet where he seemed to find more success. At one point, Hardy landed a beautiful right hand on Adams, even going to the body in a small glimpse of his standup progress. Still, Adams found success with his jab despite his own relatively uncomfortable nature in the standup department before the wrestler’s instinct kicked in and Adams dived for a telegraphed takedown that Hardy easily defended.

This ill-advised decision from Adams proved to be the beginning of the end. From there, Hardy landed a series of unanswered blows as Adams held on to the failed takedown attempt come hell or high water. Obviously not defending himself, referee Dan Miragliotta was forced to call a halt to the contest. Still concussed, Adams appeared confused and disoriented following the end of the bout and protested the decision despite it being the right call. 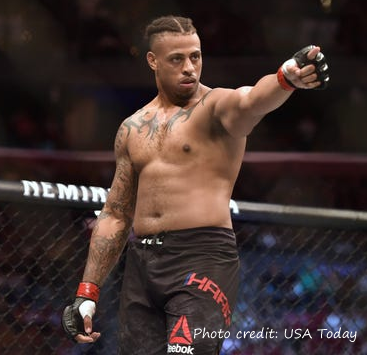 Hardy, who had been the subject of Adams’ social media ire for some time took to the Octagon in celebration, even at one point doing a cut throat routine, much to the horror of his detractors I’m sure. Adams would later storm out of the Octagon and head to the locker room, an unflattering look for a professional mixed martial artist who promised to handle Hardy in the cage but failed to deliver.

It was another quick showing for Hardy, who didn’t necessarily gain a great deal of in-cage experience in victory. “‘The same as last time,’ Hardy said of what his plans are following his latest win,” writes Lee. According to Hardy, “I’m gonna go back, I’m gonna train, I have an objective in mind and it’s being a student and also being in camp.” Unfortunately for Hardy, the last time he fought in the Octagon even UFC President Dana White was critical of his opponent’s lack luster performance.

“At a glance, it looked like Dmitrii Smoliakov wanted nothing to do with Greg Hardy,” writes MMAFighting.com’s Alexander K. Lee in his April 28, 2019 article titled, “Dana White critical of Greg Hardy’s opponent Dmitrii Smoliakov: ‘That was weird’.” The author Lee would go on to note, “Hardy dispatched Smoliakov with ease, winning by TKO in the first round, but afterwards much of the talk was centered on Smoliakov’s timid performance as opposed to Hardy’s quick finish.” According to the report, UFC President Dana White, “Refuted the notion that this was an opponent handpicked to make Hardy look good.”

MMAFighting went on to quote the UFC President as stating, “‘I’m not gonna say that I loved that fight,’ White said at the UFC Fort Lauderdale post-fight presser. ‘You guys know, I’ve been doing this for 20 years, we don’t do set-up fights for anybody. And if I was a fan and probably some of the media, the way some of the media acts, I would think that was—I don’t know who the (expletive) that guy beat in nine fights, but I’d like to see the nine guys he beat. That was weird."

If things were the same as last time, putting the pieces together paints an unflattering picture that isn’t likely to end well for Hardy. Prior to the Smoliakov fight, Hardy’s UFC debut famously resulted in a second-round disqualification to Allen Crowder back in January after Hardy threw an illegal strike to his downed opponent that apparently rendered Crowder unable to continue. Whether Crowder was seriously injured or otherwise found a way out of the fight, the result was nonetheless the same. Hardy was disqualified, taking his first professional loss in the process to the satisfaction of many eager to see Hardy tuned up in the UFC.

With only three professional mixed martial arts fights behind him prior to signing with the UFC, including three amateur bouts, Hardy now finds himself positioned within the UFC hierarchical rankings with what could fairly be described as minimal MMA experience. His disqualification loss to Crowder the only notable experience Hardy has in a genuine big-league fist fight, yet even then, much like with his other two opponents Crowder ended up turning in a less than optimal performance in his own right. In truth, Hardy has had a bizarre three fight stint in the UFC, which in itself, is a rather unique experience compared to many other fighters on the roaster.

Greg Hardy is going to need to do his homework back at his training camp American Top Team in Coconut, Florida because he is on the cusp of being thrown into the deep end of the pool where the wild things roam. Not experienced enough to occupy the current the position that he is in, Hardy is going to be relying a great deal on his A-level athleticism against certified killers in what amounts to an experiment for many that is unfortunately being conducted at Hardy’s expense.

For years, fans have wondered how the best athletes on the planet from the NFL, NBA etc. would fair in mixed martial arts competition and answers to this long-pondered question are beginning to come in. Only it doesn’t look like Hardy is going to get a chance to adequately prepare for his stay on the UFC’s death row as he is on the precipice of fighting some of the most dangerous fighters in the sport today with a string of unfortunate victories behind him in the promotion that have set Hardy up to be a lamb lead to slaughter. Greg is undoubtably being positioned within the rankings to become somebody’s doormat, so until then, Hardy would be wise to continue working hard in the gym because there is no doubt going to be a contract put out on his head that someone plans to collect on.