The Truth About Cannabidiol in Combat Sports

If you are a mixed martial arts fan you’ve likely found it hard to ignore the growing trend of fighters representing CBD related merchandise and apparel lately. Such notable MMA fighters as Chael Sonnen, Quinton “Rampage” Jackson, Liz Carmouche and many others have all enjoyed CBD sponsorship opportunities. It’s the latest craze sweeping not only mixed martial arts, but a nation. With mom and pop stores in the most remote areas in the United States now offering CBD based medicinal products in a surprisingly diverse array of categories and design.

CBD has become so mainstream that The Ultimate Fighting Championship (UFC) has recently announced a partnership with Aurora Cannabis earlier this year, one which, “Reportedly nets the UFC around $15 million per year, for the next five years,” according to a June 4, 2019 bloodyelbow.com article titled, “Nate Diaz on UFC’s new CBD sponsorship: You’re welcome, motherf—ers!” by author Anton Tabuena.

UFC superstars Nick and Nate Diaz recently launched GAME UP NUTRITION themselves, described as a “CBD-infused, plant-based super nutrition company,” according to gameupnutrition.com.

According to the report, “It’s touted as a panacea for a massive range of illnesses and conditions, and even recommended as a daily supplement to help one smooth out the rough edges of life. CBD is one of the many chemical compounds called cannabinoids that (are) isolated from cannabis (marijuana). Cannabis contains over 400 chemicals including at least 120 cannabinoids, which are chemicals that stimulate cannabinoid receptors in the body.”

Interestingly, the author goes on to state, “Yes, your body has cannabinoid receptors and you actually produce your own cannabinoids.” According to the report, “The most well-studied cannabinoids that are isolated from cannabis are delta-9-tetrahydrocannabinol (THC) and CBD. CBD is not psychoactive like THC, and there are hundreds if not thousands of producers and products now on the market, sold everywhere from country markets to pet stores to pharmacies. Like most panaceas, the hype outpaces the evidence.” “There is zero credible and convincing evidence to suggest that CBD is effective for serious conditions like treating cancer, or that routine use while well can prevent disease,” writes Gavura.

“Suddenly CBD seems to be everywhere,” writes Jamie Leventhal in her July 12, 2019 pbs.org article titled, “Is CBD legal? Here’s what you need to know, according to science.” The public broadcasting service correspondent goes on to report, “I’ve come upon it in pharmacy chain stores and gas stations. My dog kennel sells CBD (cannabidiol) gummies for pets, and multiple massage spas in the D.C.-metro area offer “CBD-infused relaxation” through lotions, oils and sprays. There are at least four cafes within a 15-minute walk of the White House that sell CBD coffee.”

According to Leventhal, “Yet here’s a strange fact about the overnight ubiquity of these products: Selling them is illegal. That’s true even though the 2018 Farm Bill removed legal restrictions on CBD if it’s derived from hemp plants. What’s equally strange: Buying CBD products is legal…at least sometimes.”

“This paradox,” according to Leventhal, “Is one of many in America’s long history of both utilizing and criminalizing cannabis. As marijuana, cannabis has been a tool for relaxation, as well as an element of mass incarceration — but also for medical benefits, like to fight the side effects of cancer chemotherapy.”

A June 24, 2019 Washington Post article titled, “CBD-infused food and beverages are still illegal under U.S. law. So why are they everywhere?” author Laura Reiley writes, “In 2017, no one knew what CBD oil was. In 2018, folks stumbled saying “cannabidiol” (that’s CBD oil) out loud. In 2019, it’s everywhere, and everyone wants in on it.”

The Washington Post would later report, “The legal status of hemp-derived cannabidiol remains in limbo. This is largely because CBD can be derived from hemp or cannabis, but if a hemp plant contains more than 0.3 percent THC (the active “high” ingredient in marijuana) it is then technically a “marijuana” plant. It’s confusing. Experts say drafting and implementing regulations could take years.”

According to Reiley, “Until now CBD products have been mostly tinctures, lotions and capsules, local or regional mom-and-pop items sold at dispensaries and often offshoots of the marijuana industry.” The article goes on to note, “Because hemp has historically been coupled with marijuana, there has been little scientific research into safe dosages, drug interactions and the long-term effects of CBD use.” 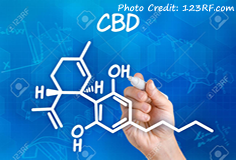 There exists a litany of over-the-counter and available by prescription products that also work equally if not significantly better for most if not all of the claimed benefits of CBD related medication and merchandise according to some experts. That is not to say that CBD does not have an effect, it’s a cannabinoid derived from a medicinally based plant that has been used for thousands of years. But the current hype surrounding CBD and its stated benefits are drastically overstated and it is little more than a marketing scheme that is generating hundreds of millions if not billions of dollars in sales globally.

“Wonder drug or modern-day snake oil,” askes Donald Moore in his June 24, 2019 Bloomberg.com article titled, “Is CBD Really the Marijuana Molecule That Cures All?” Unfortunately, the current trend of promoting CBD is all too reminiscent of the days when salesman traveled from town to town by horse and buggy pitching their miraculous tonics that cured everything from depression to the common cold. Snake oil salesman pitching alcohol and other narcotic based pharmaceuticals that indeed were effective at alleviating fools from their money, but not necessarily due to the medicinal effectiveness of their bottle of cure all serum.

Relieving fools of their hard-earned money is one thing, it’s another story entirely when its very sick people with limited funds to begin with who are desperately seeking relief from those riding the wave of ignorance in order to cash in at everyone else’s expense. These “snake oil” salesmen are only thinking about dollars and cents, not the actual human equation that their dishonest sales tactics and empty promises mean in the grand scheme of life.

“All these claims about CBD oil well, they do have healing properties for epilepsy and many other conditions. But, it's the synergistic effect of all these cannabinoids in THC and CBD working together - that's when you see the real effects.  So, CBD does have its benefits but I'll tell you one thing brother, if you have cancer you better be looking for THC oil. Having a small percentage of CBD content can be beneficial no question about it, maybe 2% even up to 6%.But, it's the 20% THC that to me... that's the main cancer killer.”

For decades, plant breeders have selected against it. Long time smokers of cannabis avoid it, an inside joke among those in the know, today CBD and unfortunately medicinally based THC-dominant cannabis itself, is bestowed with a wonderous assortment of alleged medicinal properties and benefits despite the truth being much more mundane than the propaganda espousers and “snake oil” salesmen would have you believe.

While cannabis may help alleviate the symptoms associated with conventional cancer treatment, it would be wholly irresponsible to suggest it is an effective treatment in and of itself in the fight to eradicate cancer from a sick patient’s body. The research simply isn’t there, despite the well-meaning claims of those who state to the contrary. At best, alternative therapies such as Rick Simpson’s Cannabis Oil should be used in conjunction with standardized, conventional treatment under trained medical supervision. No drugs are without side effects, including CBD. Exercise caution when using CBD products in conjunction with other medications and always seek a trained medical professionals’ opinion when dealing with matters of medical necessity; never rely on the false hope that can easily creep into one’s life at your most vulnerable time because some clever, unscrupulous wordsmith pulled at your tender heart’s strings.

Even within the cannabis community itself the debate rages concerning the true effectiveness of CBD in relation to its “panacea” of claimed medicinal benefits, and considering the mainstream push behind this latest marketing trend, it is my opinion there is more medicinal hype behind CBD than the medicinal fact. The many years of the war on drugs and cannabis prohibition in North America contributing to the public’s overall desire to see cannabis related products legally flourish in the United States and beyond despite the true medicinal properties and claims made behind CBD’s actual effectiveness.