They write books about men like Igor Vovchanchyn. In fact, one exists by author Daniel DiMarzio called “The King of Fighting” available on Amazon.com. Among the last of a dying breed, very few fighters will ever walk planet earth that will occupy the same level of respect that I reserve for men like Vovchanchyn. A living legend in mixed martial arts circles, Vovchanchyn’s fighting career to this day serves as an example for generations of fight fans of what true greatness is all about. If there was a Mt. Rushmore of mixed martial arts, Igor Vovchanchyn (55-10, 39 KOs) would no doubt occupy a spot reserved for the sports all-time greats.

ESPN ranks “Ice Cold” Igor Vovchanchyn as the #9 hardest hitter in mixed martial arts history. An arbitrary ranking with no kind of quantitative data to support such a premise, the standing is little more than a ceremonial acknowledgement of a now forgotten pioneer of the sport who at one time was the very definition of a no holds barred fighter. Long before mixed martial arts caught on with the general public fighters just like Vovchanchyn paved the roads that so many freely travel today. 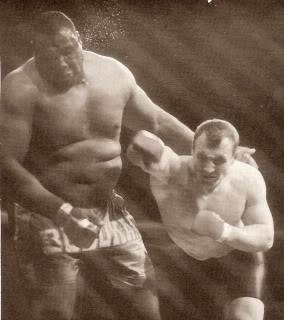 According to the ESPN report, “Vovchanchyn’s hands, calcified and raised like rolling hills at his knuckles, unveiled epitaphs for opponents for a decade. The “Ice Cold” Ukrainian, carrying 235 pounds on a 5-foot-8 frame, ruled multi-fight one-night tournaments (often bare-knuckle) from 1995 through 1999, amassing a 37-2 record and a hit-list of KOs. He continued racking up wins and stoppages in Pride before leaving the sport for good in 2005.” A Pride FC 2000 Open Weight Grand Prix finalist, Vovchanchyn lost to the great Mark Coleman by TKO in his third fight of the night.

In an era when media and fans bestow incredible praise upon fighters who win titles in multiple weight classes, often times gifted title shots they did not earn through conventional means, Vovchanchyn would routinely fight competitors far larger than himself on a regular basis. Often times battling multiple hulking beasts in one night, making Vovchanchyn not only a giant killer but a road warrior who left opponents decimated in his wake.

The fact of the matter is the modern sport of mixed martial arts has very few athletes today who would even dream of entering the same tournaments Vovchanchyn did over two decades ago now. We are talking no holds barred, multiple fight one-night tournaments with no weight classes. It’s a completely different environment to the highly regulated sport of mixed martial arts we enjoy today, which unfortunately is little more than a watered down, pseudo version of the real thing.

Today’s mixed martial arts is marked by numerous weight classes, with a litany of stars throughout the various weight divisions. In the mid ‘90’s the vast majority of these fighters wouldn’t even be in the sport, much less the stars that they are today for a variety of reasons listed above. Not the least of which being that they simply couldn’t compete and succeed against fighters twice or even three times their size or more in some cases. And with the likelihood of such a scenario playing itself out multiple times in one night, under bare knuckle, no holds barred rules the modern landscape of mixed martial arts stars would look quite a bit different than it does today. It would be a different sport, with different rules and different faces of the sport than we have at the present time.

The golden years of no holds barred were a much closer version to reality than the sport we have today under the unified rules of mixed martial arts. The modern landscape little more than a mirage, fantasy, a fraud perpetuated to the public under the auspices of a politician’s pen and will to control. Take away the laundry list of rules, regulations and weight classes and watch the modern facade of mixed martial arts crumble under the weight of authenticity.

A place where men like Igor Vovchanchyn thrived and those living the lie that they are today would be involved in another line of work somewhere, anywhere, but in the ring or cage where there are no rules, there are no weight classes and the only thing that truly matters is who walks out of that squared circle the tournament winner at the end of the night.

Igor Vovchanchyn is the red devil, a fearsome striker who was “every fighters nightmare” according to UFC Hall of Famer Bas Rutten. Today, the term “legend” is liberally tossed around to a variety of fighters who are accomplished mixed martial artists in their own right. But in a sea of “legends” Igor Vovchanchyn is a man amongst men. He is the guy your favorite fighter is standing in line to meet, a legends legend who will forever be remembered in history as among the greatest to ever compete in the sport of mixed martial arts.