Believe it or not, there are entire systems of martial arts dedicated to breaking bones and squeezing the life out of your opponents. Some better known than others, though no less effective in their own right. In an April 8, 2012 bloodyelbow.com article titled, “MMA Origins: The Gracie Era in the UFC,” author T.P. Grant writes that, “The creation of the Ultimate Fighting Championship in November of 1993 marked the true start to American interest in mixed martial arts, known as No Holds Barred fighting at the time. It had been created by Rorion Gracie with the goal of spreading awareness of Brazilian Jiu-Jitsu to the American public.” Today, Brazilian Jiu-Jitsu is the predominant submission based martial art in mixed martial arts gyms across the globe.

There from day one, another style of submission grappling made its modern-day debut at UFC 1 as well. Catch-as-catch-can wrestler Ken Shamrock advanced to the semi-finals of the inaugural No Holds Barred tournament by submitting the dangerous Patrick Smith via Heel Hook in the opening round. Shamrock would go on to succumb to the eventual tournament winner Royce Gracie via rear naked choke in the semi-finals but not before making a name for himself as a dangerous submission artist in his own right. 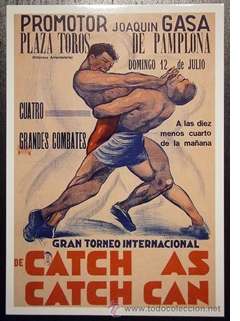 Still a relatively unknown martial art outside of educated circles, Britannica defines catch-as-catch-can-wrestling as a, “Basic wrestling style in which nearly all holds and tactics are permitted in both upright and ground wrestling. Rules usually forbid only actions that may injure an opponent, such as strangling, kicking, gouging, and hitting with a closed fist.” According to the widely used online encyclopedia source, “The object is to force the opponent into a position in which both shoulders touch the ground at the same time. Formerly known as the Lancashire style in England, catch-as-catch-can became the most popular form of wrestling in Great Britain and the United States and, with slight modifications, was introduced into Olympic and international competition as freestyle wrestling.”

According to a YouTube video titled, “Catch as Catch Can Wrestling History,” this submission based style of grappling owes its origins to an ancient Greek style of wrestling that dates back millennia. “The art of catch wrestling, or hooking, is one of the oldest forms of fighting known to exist,” explains the documentaries narrator. “It’s lineage dates back to 646 BC when it was introduced to the Greek Olympics as Pankration. Many of these matches were quite brutal and often resulted in death,” according to the social media report.

The documentary went on to describe the modern origins of this very old European martial art. “In the late 19th century a group of carnival wrestlers emerged that practiced a modified form of the original Greek style calling it hooking.” According to the report, “These hookers traveled show to show challenging any who would dare to step in the ring with them. These unique fighters made a dangerous living out of matches that often-left challengers with broken bones and damaged tendons.”

In an April 8, 2016 Singapore Sports Council report titled, “The Brutal Art – Catch Wrestling in Asia,” author Qin Yunquan writes that, “Catch Wrestling became immensely popular across both sides of the Atlantic during the late 19th and early 20th century – thanks in particular to the travelling carnivals.” According to Yunquan, “In America, a very brutal hybrid of catch known as ‘Rough and Tumble’ fighting where striking, submissions, eye gouging, biting etc. were allowed,” emerged. Very reminiscent to the contemporary Vale Tudo and No Holds Barred eras of mixed martial arts today, it was the UFC before there was a UFC.

According to a May 11, 2017 Orlando Sentinel article titled, “Shayna Baszler pays homage to wrestling, MMA mentors,” author Jay Reddick writes that, “Baszler is one of the few Americans – and the only female -- certified as a competitive catch wrestler.” Shayna, a professional wrestler and mixed martial artist would go on to tell Reddick that, “If you look at the history of professional wrestling, it started out as shoot fighting until they figured out, they could make more money working fights [and fixing results] and people would watch." Shoot fighting, according to Qin Yunquan is a sub style of catch-as-catch-can wrestling.

No Holds Barred fighting quickly came under scrutiny in the United States, too real for its own good, by 1996 it had drew the ire of Senator John McCain and by 2001 the NHB era was officially over with altogether. In its place, a pseudo, watered-down version of the real thing known as mixed martial arts today. Hardly as real as it gets, the modern landscape of MMA is the result of political posturing and government overreach.

Mixed martial arts and professional wrestling are kissing cousins. Both incarnations of modern-day entertainment that are pseudo representations of the same original Greek concept known as Pankration. One the result of big government solutions to problems that never existed in the first place; the other simply a more fan friendly version of an old concept. Both watered down, substitute systems of hand to hand combat with ancient and deadly origins.