Thiago Santos has a long road to recovery ahead of him following his split decision loss to UFC light heavyweight champion Jon Jones at UFC 239. According to a July 17, 2019 ESPN.com article titled, “Santos to undergo surgery on both knees,” the thunderous light heavyweight contender, “Tore the ACL, MCL, PCL and meniscus of his left knee,” in route to going the distance with perhaps the greatest fighter the sport has ever seen in perennial division kingpin Jon Jones. A partial ligament tear in Santos’s right knee was also reported to complicate matters even further for the Brazilian powerhouse.

It was a magnificent showing for Santos who came to fight; a much more competitive affair than most expected, the light heavyweight showdown ultimately proved to be the kind of performance to put Thiago Santos’s name on the map even in defeat. It was a fight where at least one judge thought Santos in fact won the bout despite the officially rendered decision and there is a growing community of fans, pundits and alike who agree with the lone judge’s decision. 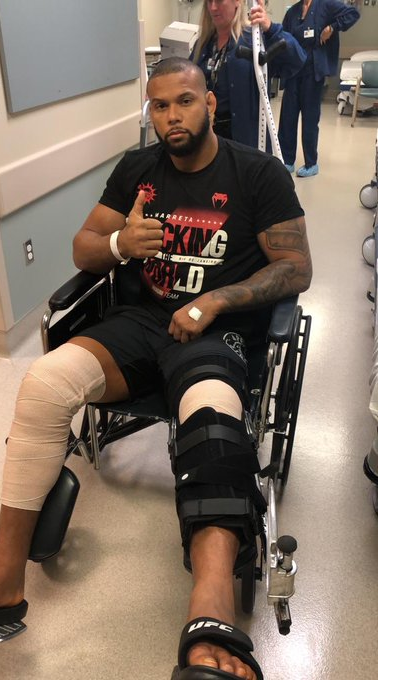 Santos is expected to be out of commission for eight months, putting his return date to the Octagon somewhere in early 2020. Thiago Santos left it all inside the cage, knee injuries are notoriously career impending circumstances that athletes routinely return from never quite the same as they once were. Highlighting the dangers involved in competing in the sport of mixed martial arts, where even at the amateur level career threatening injuries are common place and the professional ranks are notorious for their high risk, low reward return as fighter pay has been at the forefront of mixed martial art debates for decades now.

MMAFighting.com reports Santos is expected to take home $350,000 for his efforts at UFC 239, not getting into the costs associated with medical bills and the normal fees associated with trainers, gyms etc. only time will tell if Santos is able to make it back to championship form and continue his career at the top echelons of mixed martial arts competition or if this career defining performance against Jones ultimately marks the beginning of the end for the young athlete. Going forward, Santos’s mobility and ability to rely on devastating leg kicks will very much be in question and could ultimately force Santos to adopt a new game plan while fighting in the cage or perhaps significantly reduce his overall effectiveness altogether. Only time will tell, the only silver lining in all of this is the fact many believe Santos in fact won the fight and in the world of professional cage fighting that kind of praise certainly will lead to a new found respect from many of his fans and peers.

The first round was marked with a volley of leg kicks from both fighters, with Jones landing his customary front leg side kicks notorious for injuring his opponent’s knees. Such as the case with a former Jon Jones opponent in Quinton “Rampage” Jackson, who would go on to suffer lingering knee issues years after his fight with Jones was all said and done. His career nearing the end of the road, “Rampage” would go on to leave the UFC and work diligently for the rival MMA promotion Bellator, though never quite the same fighter as he once was posting a 6-4 mark at the time of this publication.

Santos would later go on to claim that he injured his knee from a kick in the first round to the astonishment of his physicians who were at a loss to explain how Santos continued to compete against Jones going forward for another four rounds with the injuries that he is reported to have suffered early in the fight. By round two, it was apparent something wasn’t quite right with Santos after his first attempted leg kick. Even the UFC cage side commentators noticed Thiago’s mobility issues by the second round, speculating he may have injured himself or even had a pre-existing medical condition despite the fact Jones had landed at least two oblique kicks by that point and attempted several others. “Honestly, I think that Jon Jones is bad for the sport,” Jackson told Inside MMA according to a October 25, 2015 bloodyelbow.com article by Zane Simon titled, “Rampage: ‘We don’t go in there to try and injure people’ the way Jon Jones does.” According to Rampage, “When he fights people, he injures us. He kicked my knee backwards; my knee is never the same. He’s done it to a couple other guys (too).” Continuing, Rampage went on to say, “He’s kicking their knees backwards and really trying to hurt people. So, I think that’s bad for the sport.”

The front leg side kick, also called an oblique kick in some circles has the same objective. To injure your opponents’ leg, in particular their knee; minimalizing their mobility thus rendering their offensive techniques less effective while in return making them more suspectable to their opponents own offensive initiative. A technique Jones specifically picked up at Jackson-Wink MMA in Albuquerque, New Mexico, the oblique kicks are a common theme in many of Jones’s fights. Though a controversial technique that Rampage believes should be illegal and banned from the sport altogether. It wouldn’t be the first time an effective technique regularly utilized by a fighter was banned either, there is actually precedent already set for just such a rule to be put in place. The UFC famously banned headbutts not long after UFC legend Mark Coleman effectively utilized the technique in route to decimating his opponents in October of 1997. “The Godfather of Ground and Pound,” Coleman is a former 1992 Olympian with the wrestling chops to helplessly pin his opponents to the canvas while headbutting them into submission. Though obviously still legal for the time being, there is a growing list of victims to Jones’s oblique kicks who may find their careers ultimately cut short or hampered to a significant degree as a result of this technique. While it obviously failed to deter the heart and sheer will Thiago Santos brought to Jon Jones in the cage that night at UFC 239, Santos will have the next eight months to decide what to do with that $350,000 pay day which may need to last him a lifetime. Santos will likely live to fight another day; the only question is at what cost? The only fight in recent memory that Jones has yet to test positive for metabolites of a banned prohibited substance; Thiago Santos’s performance at UFC 239 is a career defining moment and something that an athlete can hang their hat on.