A former reigning, defending UFC 170-pound welterweight division champion, “Ruthless” Robbie Lawler is a warrior. Not just a bully in the cage when things are going his way, Lawler comes to fight even in the face of overwhelming odds. In an age where fighters cut weight to be the bigger man in the cage, “Ruthless” has transcended weight classes to capitalize on all opportunities presented to him however challenging they may be. This is the kind of old school, take on all comer’s mentality that mixed martial arts needs more of but is unfortunately faced with the grim reality that fighters like Lawler are a dying breed.

What has always stood out to me about Lawler is the ferocity he brings to the cage, not known as “Ruthless” for nothing, Lawler is a vicious stand up fighter always looking to separate his opponents from consciousness. Simply put, Lawler brings it. Among the most memorable bouts of Robbie’s career was his brutal knockout victory over kickboxing legend Melvin Manhoef. Outclassed and overpowered, Lawler was beaten like a red headed step child from post to post by the incredibly dangerous “No Mercy” Manhoef.

Eaten alive by brutal leg licks, Manhoef managed to spin Lawler around with his tremendous power. Still, the crafty veteran stayed in the fight despite being well on his way to heading in the wrong direction of a 10-8 round by cracking the overzealous Manhoef with a zinger of a right hand and follow up shots that left the Dutchmen stiff as a board. Lawler had snatched victory from the claws of defeat, displaying the heart of a lion and the will of a champion in the process. Robbie Lawler is an apex predator in the ring or cage, a manhunter who will do or die trying as he epitomizes all that makes the sport of mixed martial arts great. 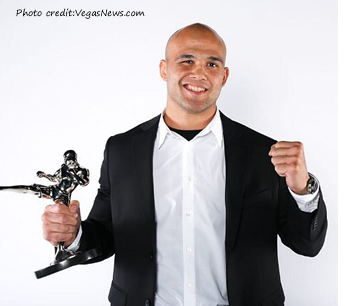 The whispers in secluded corners of the online world, in the endless pages of mixed martial arts discussion boards is that fighters are never the same after they face Lawler. With exceptions to the rule, there may be some truth to the reputation that proceeds the “Ruthless” one who has shattered noses and left once perennial division powerhouses seemingly on the outside looking in after locking horns with the former Miletich Fighting Systems protégé. Lawler can dish it out just as well as he can take it, and for this reason alone remains not only a fan favorite but a sure bet to be enshrined in the UFC Hall of Fame.

According to an August 1, 2019 Sherdog.com article titled, “Robbie Lawler: 5 Defining Moments,” author Guy Portman writes, “An 18-year veteran of the sport and a former Ultimate Fighting Championship, EliteXC and Icon Sport titleholder, Robbie Lawler has compiled a 28-13 professional record since he made his professional MMA debut in 2001.” A mixed martial arts pioneer, Lawler will face former UFC interim welterweight champion Colby Covington at UFC on ESPN 5 in Newark, New Jersey Saturday night in a fight that has title implications for Covington.

According to Sherdog.com’s Nathan Zur, “Covington has been told that a win over Lawler will guarantee him a future title fight against the current welterweight champion Kamaru Usman and Lawler says the same thing hasn’t been discussed with him if he wins on Saturday night.” The August 1, 2019 report went on to quote Lawler as stating, “There’s been no discussion. I’m just focusing on Saturday and getting home and hopefully start working out on Monday and take a few days off then go on a mini-vacation and get back to work the following Monday. It’s just business as usual,” Lawler said.

Convincingly knocked out at UFC 201 in July of 2016 by Tyron Woodley, Lawler is 1-2 in his last three appearances since and is coming off a spirited showing at UFC 235 earlier this year in a controversial loss to popular UFC wrestling phenom Ben Askren. Covington (14-1), is on a six-fight win streak and hasn’t lost a fight since late 2015. With half of Colby’s fourteen victories coming by way of decision, Lawler is expecting Covington to mix it up on the feet but is ready for Covington’s stifling wrestling base when the time ultimately comes.

“Obviously, all the fights start standing, but he’s going to mix it up on his feet and be well rounded and disguise stuff and keep me off guard,” Lawler told MMAJunkie.com. With Robbie having a knockout in mind at UFC on ESPN 5, there is no doubt Colby Covington is going to have his hands full with a Robbie Lawler who will be looking to do his talking in the Octagon once the cage door swings shut for the final time come Saturday night.