“How much money do you want to make,” asked ESPN MMA analyst Chael Sonnen in his December 26, 2019 YouTube video titled, “Cowboy Cerrone paid to take a dive against Conor McGregor?” While that is certainly a fair question to ask in the world of professional prize fighting, where athletes are willing to ply their particular trade of violence for the promise of monetary incentive and eternal glory; but when posed to an original fan of the sport who only writes about mixed martial arts for the love of the game, you’re likely going to receive a very different and unconventional answer than that of a professional mixed martial artist.

“There was a headline that came out on MMAWeekly and it was that “Cowboy” Cerrone was offered money by the UFC to take a dive against Conor McGregor,” explained the Bad Guy Inc. CEO Chael Sonnen. According to the Bad Guy, who has had more than one all-time great right where he wanted them, “That’s a hard statement for me to even get out because of the level of ridiculousness. Guys, that did not happen, period. We could stop right there, but if we did stop right there, we can’t have any fun, so let’s talk about it for a couple minutes."

“Here’s the deal, why would that ever happen to start with? Why? What would the motive be?” asked Sonnen. “Well, you got to get Conor a win and he is a really big star,” explained Sonnen in attempting to answer some of his own questions as to why Cerrone might accept money to take a dive against Conor McGregor. Simply put, Conor McGregor’s fight against Donald Cerrone (36-13, 10 KOs) Saturday night is of the utmost critical nature due to the possibility of big money fights looming on the horizon against the likes of Floyd Mayweather Jr., Manny Pacquiao and others on the professional boxing landscape where Zuffa Boxing has designs to make waves in the industry during 2020 and beyond. 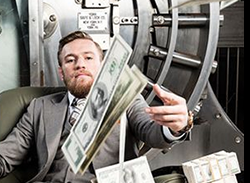 “Guys, this would be illegal to the highest of levels. I assume that you would know that, perhaps you don’t and I would have to bring it up to you. For Cowboy to accept that, of which he wouldn’t (laughter), he would be going to jail. He would be put in handcuffs, its illegal.  This was actually tested just recently, there was a fighter, was he from South Korea? It was somewhere in the last year, who did a dive and it had to do with a sports book. And he somewhere placed a bet and something along these and he did a dive. And it was a small under UFC, but big under and he got caught. They arrested him, it is stealing, it is fraud. I cannot explain to you how illegal that this would be, your license would be gone," explained Sonnen.

And while some may question the efficacy in citing an actual example of a case which resulted in a fighters conviction for his role in a plot to take a “dive” in the modern era of the UFC as a reason why the idea of Cerrone reportedly being paid to take a dive against Conor McGregor (21-4, 18 KOs) at UFC 246 is “ridiculous,” it pays to understand that Sonnen’s ultimate fighting championship talking point is that the UFC is as real as it gets.

The fight Sonnen is referencing of course was Tae Hyun Bang vs. Leo Kuntz at UFC Fight Night 79 in 2015, where Tae Hyung Bang was ultimately sentenced to 10-months in prison for his role in the fight fixing scheme which made headlines around the world. Coincidentally, for those interested in learning more I just recently interviewed UFC veteran Leo “The Lion” Kuntz for BoxingInsider.com, who discussed among many things his 2020 professional boxing debut, the Tae Hyun Bang fight fixing controversy and his desire to fight Bellator’s Dillon Danis in the cage.

“So, to act as though somebody would then play a hand in the manipulation of the winner of a contest, to tell you the level of absurdity five-times removed is all I can do,” continued Sonnen in his impassioned, if not tongue in cheek explanation in no uncertain terms that fighters being paid to take dives in the sports premiere mixed martial arts organizations simply doesn’t happen.

“And if you are one of those jerks that wants to come back and go, ‘Oh yes, but it would be better (inaudible) … shut up!’ You’re not a guy who does business, you’re not! That’s what you’re telling, you’re saying you don’t really know how this works. You’re a checkers player instead of chess, you’re seeing today instead of the big picture, you’re revealing yourself if you’re one of the guys on the underground forums saying, ‘This is what the UFC wants,’” explained Sonnen.

And while the former UFC middleweight title contender didn’t elaborate on what the big picture in fact is, its safe to say he is referring to the fact the shelf life of mixed martial arts fighters is a relatively short one. The wear and tear on their bodies, the ins and outs of the sport and its cut throat, business-oriented nature means athletes are routinely chewed up and spit-out to dry with little regard for their financial security or physical well being. And for those smart enough to recognize exactly how the game is played, you either play ball with the industry playboys or you find yourself on the outside looking in; broken, chewed up with few other options in an industry where there is always a fresh new babyface ready to take your place.

Unfortunately, that is the big picture here, the overall view of the field of play. While many fighters are convinced that they’re playing checkers, its only the certain few smart enough to recognize the difference between a chess and checker board. And its this fallacy, this mistake in logic and reasoning which continues to drive the entire mixed martial arts industry today. As long as the majority of the Marks continue to mistake the field of play for a checkers board, instead of quite clearly recognizing that they are engaged in a game of chess; the longer the charade and mirage will continue to pull the wool over the publics eye of perception. Which is of course what this is all about, perception is reality. And as long as the public perceives mixed martial arts to be real, the longer that perception will continue to be their reality.

“Do you think for a millisecond, I mean do you really think for a millisecond there is not a strategic plan in place at the headquarters in Las Vegas right now should Donald Cerrone win? Are you that naïve and new the sport? You believe this whole thing is only based around if Conor wins, otherwise the train goes off the tracks? I mean come on; how long have you been following this sport? How did you find the great Chael Sonnen over there? I feel like you had to look for me just a little bit. You can’t be that much of a newbie and you can’t participate in conversation that ridiculous,” proudly boasted Sonnen in highlighting both what a modern day scripted promo looks like in mixed martial arts and the very real similarities associated with modern day professional wrestling in selling yourself to the audience as a man not to be tangled with intellectually or otherwise.

And while it may sound like Sonnen is saying the UFC has a plan even if Cerrone decides to break script and actually shoot on McGregor, his ultimate message was an attempt to shut down once and for all any narrative which would suggest that the UFC is so tightly regimented, controlled and organized that the very idea of anything being scripted or manipulated in any way, shape or form during the match making process is illegal and therefor completely out of the realm of possibility. Of course, for those of us who are familiar with “The Anatomy of the Fight Game,” there are many ways in which fights have been traditionally fixed in boxing though there are those who would have you believe boxing is a completely different animal to that of professional mixed martial arts.

Interestingly, according to a December 29, 2019 MMANews.com article titled, “Rampage Jackson Responds to Fans Claiming He Took A Dive Against Fedor Emelianenko,” the former UFC light heavyweight champion was quoted by author Fernando Quiles Jr. as stating, “When the bag secured and the ladies waiting in the back of the room,” followed shortly thereafter with a message that reads, “I’ll never do a fixed fight Fador (sic) won fair, i have to get my weight down, that loss was on me.” While the reader is ultimately left to decipher the cryptic Instagram text and its ultimate true meaning, it appears clear that the idea of fighters taking a dive on the big stage in modern day mixed martial arts isn’t as ridiculous as some MMA analyst would have you believe.

The question of how much money do you want to make in mixed martial arts in one which not only fighters need to ask themselves, but mixed martial arts journalists as well. The topic of “Fight Fixing in the Modern Era of Prize Fighting” is a taboo subject by nearly all run of the mill MMA journalistic website standards and therefor is a subject the average fan simply cannot and will not be exposed to by average MMA outlets or journalistic personalities.

Which is why the honorable Chael Sonnen of Bad Guy Inc. is to be commended in making sure his fan base has a bit of fun in understanding fighters being asked to a take a dive in the UFC just doesn’t happen. Of course, to those of us with no financial ties the mixed martial arts industry, and thus no skin in the game, the idea of fixed fights not occurring in mixed martial arts is about as sea worthy of an idea as a boat taking on water. With the absolutely critical nature in which Conor McGregor’s future rest Saturday night, be sure to tune into the UFC 246 main event live on ESPN+ pay-per-view to catch all the action.