The Internationally Backed Marxist Insurgency in the United States

The Internationally Backed Marxist Insurgency in the United States

“You cannot invade the mainland United States. There would be a rifle waiting behind every blade of grass,” the Japanese Admiral Isoroku Yamamoto once noted in evaluation of the wisdom behind such a fool hardy decision. Though if the sleeping giant is unable to wake up from its cumbersome slumber, an ideologically subverted people will be unable to “to come to a sensible conclusion in the best interest of defending themselves, their families, their community or their country,” warned former KGB agent Yuri Bezmenov as the targeted American population finds itself virtually asleep behind wheel as sedition and treason sweeps across the land. With an internationally backed Marxist insurgency currently unfolding in the US with the expressed intent to overthrow the United States government, the coup d’état launched by the democratic left in this country is intrinsic to the insurgency itself as a troubling picture begins to emerge of the socialist indoctrination of America directly leading to the possibility of civil war or invasion.

And with a global pandemic currently underway in the United States with origins deriving by way of a Wuhan, China laboratory the international nature and scope of the government overreach into the lives of ordinary Americans from coast to coast is evident and clearly defined. Unfortunately however, most Americans are failing to see the forest for the trees as the overall picture of what is occurring in the United States today depicts a series of troubling events unfolding behind freedoms back and underneath lady liberties nose.

For those who have been paying attention, the signs of something sinister underway were there years if not decades ago but were never mainstream enough to catch the general publics attention. And what did manage to leak out into the collective mainstream consciousness was effectively compartmentalized and discredited as fringe conspiracy theory despite the validity of the information presented. Whether through counter intelligence programs (COINTELPRO) or outright cognitive dissonance, existing in a state of disbelief despite an abundance of evidence to support a logical conclusion is a common occurrence among a targeted audience of ideological subversion.

According to the former KGB propagandist agent Yuri Bezmenov, ideological subversion consists of four basic stages to include demoralization, destabilization, crisis and finally normalization. The culmination of which leading to either civil war or invasion followed by a period of military occupation where the normalization of the communist takeover of America is completed. "A person who was demoralized is unable to assess true information," Bezmenov explained in a 1984 interview with G. Edward Griffin. "The facts mean nothing to him."

"Even if I shower him with information, with authentic proof, with documents, with pictures,” Bezmenov continued. “Even if I take him by force to the Soviet Union and show him concentration camp, he will refuse to believe it, until he receives a kick in his fat bottom. When a military boot crashes his balls then he will understand. But not before that. That's the tragedy of the situation of demoralization,” Bezmenov explained.

The faces of the international Marxist insurgency can be found within the individual sources and players of the ongoing coup d’état attempt to overthrow the Trump administration. Whether through the endless obstructionist resistance policies waged within the subversive elements of the United States government to include the golden showers conspiracy, the impeachment of the president over the Ukraine quid pro quo accusations or any of the other numerous wild, absurd and baseless accusations thrown at the Trump administration the "democratic" party is engaged in a winner takes all symphony of Benedict Arnolds which should give every American pause for concern regardless of political affiliation.

According to a November 22, 2019 NPR report, “Seven Russian sources told British specialist Christopher Steele the hotel anecdote, write Glenn Simpson and Peter Fritsch in their new book, Crime in Progress: Inside the Steele Dossier and the Fusion GPS Investigation of Donald Trump.” The “hotel anecdote” in question, of course, is the now widely discredited golden showers conspiracy theory concerning the alleged existence of a video depicting president Donald Trump in a compromising position with Russian prostitutes. The preponderance of which sparked a highly publicized clandestine wiretapping investigation of Trump campaign officials now colloquially known as the treasonous Obamagate investigation.

Christopher Steele, a former MI6 British intelligence agent, and his Russian sources are hardly the only foreign assets involved in the internationally backed Marxist insurgency. According to an October 1, 2019 Washington Post article from Aaron Blake titled, “Barr’s probing of Australia, Britain and Italy suggests a conspiracy focus,” testifies to the international scope and nature of Marxist insurgency as the picture increasingly comes into focus of a real life Red Dawn scenario unfolding in the United States where the enemy from within shapes up to make the future of the nation itself an interesting proposition to consider.

With the release of the Chinese coronavirus bringing draconian scientific socialism measures to the shores of America, prompting a near nationwide lockdown, a January, 2000 LSU.edu report from Major Kirk Davies titled, “The Imposition of Martial law in the United States,” paints an eerily familiar scenario where the release of a biological agent amongst the general population prompts a declaration of martial law in response to the national crisis in which widespread dissent to unconstitutional measures is expected to overwhelm local authorities prompting the US military to intervene after FEMA fails to effectively provide for the situation..

Such a scenario would no doubt spark continuity of government of operations as Uncle Sam moves to protect itself from a variety of scenarios potentially threatening the continuity of government operations to include domestic insurrection and even invasion. Interestingly, according to a March 30, 2020 local Denver CBS report titled, “NORAD, Northcom Move Personnel to Cheyenne Mountain Bunker Amid Pandemic," we find just such a scenario already well underway and a sobering glimpse of reality.

“Some of the most critical US senior military commanders and nuclear and special operations forces are now operating under extraordinary protection measures to ensure that in the event of a sudden security crisis, including any potential nuclear mission, there will be enough healthy troops and leaders to carry out orders as the coronavirus pandemic grows,” the CBS report reads. Highlighting the often underreported and overlooked militarized response by the United States government amidst a global Chinese coronavirus pandemic attesting to the stark and ominous gravity of the situation.

Though purely speculation, this is a much more plausible explanation for the numerous reports of increased militaristic activity across the country contradicting official narratives to include a March 26, 2020 KTLA 5 news report titled, “Movement of military vehicles through Socal is routine and not related to coronavirus, officials say.” And with elements of the United States military positioning itself for a potential nuclear mission, consider the June 3, 2020 NY Times op-ed piece from Senator Tom Cotton titled, “Tom Cotton: Send In The Troops," imploring the president to invoke the Insurrection Act in putting down the Marxist insurgency bestowing chaos and violence in the streets of cities across the nation. 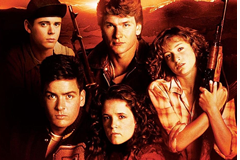 Troublingly, in the 1969 book, “As Peking Sees Us: ‘Peoples War’ in the United States and Communist China’s American Policy” authors H.C. Ling and Yuan-li Wu discusses the 1963 Mao Tse-tung thesis, “forecasting the eventual overthrow of the American system of government through internal revolution.”  Found in the chapter titled “The Potential for Insurgency in the United States,” the authors going on to discuss China’s role in supporting the overthrow of the United States government by aiding militant black extremists, white anarchists and pro-Chinese communist groups with “moral and propaganda support” to include “technical assistance as opportunity presents.”

And if those apples weren't hard enough to swallow, according to a July 2, 2020 The Epoch Times article titled, “’Peoples War:’ Pro-Chinese Communists Claim Credit for ‘Sparking’ US Riots,” author Trevor Loudon writes that, “Leaders of the pro-Chinese Communist Party (CCP) Freedom Road Socialist Organization (FSRO) have claimed credit for “the spark that has inflamed the world,” referencing the recent wave of rioting that has devastated several U.S. cities.” As if that information isn’t troubling enough, another July 2, 2020 report from the Epoch Times investigative journalist Joshua Phillip goes on to ask, “Why would the war fighting branch of the Chinese military be stealing data, personal data, of millions of Americans?”

Considering the troubling nature of that question in relation to the preponderance of evidence to suggest there is an internationally backed Marxist insurgency currently unfolding in the United States which can be sourced to former MI6 British intelligence officers, Russia, Australia and even Italy there is ample evidence to suggest a United Nations based effort to overthrow the Trump administration and circumvent the will of the American people. Considering former U.S. ambassador to the United Nations Samantha Powers' role in the unmasking scandal of General Michael Flynn; this theory begins to hold even more water as the pieces begin to come together to form a very troubling picture.

And the same violent protests being coordinated by pro-Chinese communist groups such as Freedom Road Socialist Organization and Liberation Road which are taking to “affluent, white suburbs” according to the Los Angeles Times demonstrate the increasingly volatile protests are part and parcel to the outright assault on Americans described by president Trump as, “an offense to humanity and a crime against god."

In other words, the United States is under attack from subversive entities from within who are in many cases unknowingly part of an internationally backed Marxist insurgency with designs to overthrow the United States government. From the useful idiots attached at the hip to the Bernie Sanders Democratic Socialist party down to the ordinary Joe Democrat citizen actively supporting the subversive elements of the socialist democratic party; all are willful contributing role players to the attempted overthrow of the United States government. With an ideologically subverted people unable to see the forest for the trees, the former KGB agent Yuri Bezmenov warned of the possibility of civil war or invasion unless the American people forced their government to stop aiding communism and immediately embark on a 15-20 year reverse course of action to teach the basic values and principles of American patriotism to future generations of American youth.

And until the sleeping giant wakes up from its cumbersome slumber, the idea of a rifle waiting behind every blade of grass in the event of an invasion likely didn't include the slow, gradual process of ideological subversion where the host nation finds itself overun by subversive elements with evil intentions from within. Closely associated with the term socialist indoctrination, ideological subversion is a militaristic concept with psychological warfare implications where as the hearts and minds of the American people are vanquished through the widespread adoption of Marxist-Leninist ideology. Also known as scientific socialism, its a poisonous ideology which is prescribed by educators, politicians and mass media subversive agents as an educated train of thought and enlightened sense of being based upon a strict adherance to partisan party politics. Through the infiltration of the American public education system; the socialist indoctrination of multiple generations of American youth potentially resulting in civil war or even a Marxist movement to openly welcome an invasionary force to the shores of the United States with treasonous open arms without so much as a shot even being fired as the sleeping giant finds itself asleep at the wheel with sedition and treason sweeping across the nation.