Matchups make fights, and in the world of the combat sports entertainment industry where some fighters are perennial draws warranting special treatment within the organization strings are pulled and narratives are created in order to ultimately satisfy financially crafted masterplans and schedules. With another big money payday looming against boxing elite, the UFC is doing everything in their power to insert Conor McGregor into a championship role in order to once again share the ring or cage against one of boxings elite. With UFC lightweight champion Khabib Nurmagomedov having already proven the better man in the cage against McGregor, the UFC is now positioning Justin Gaethje for UFC lightweight championship contention.

A fighter with a Division I All-American collegiate wrestling pedigree and an aggressive, balls to the wall style of striking, Gaethje has long since been considered custom built to dethrone the undefeated Nurmagomedov. And with news of yet another Nurmagomedov vs. Ferguson cancellation, the wheels are once again in motion to align the very hittable Justin Gaethje for a potential showdown with Conor McGregor should he manage to capitalize on the interim UFC lightweight championship title fight against Tony Ferguson.

In attesting to the latest strange, weird and out of the ordinary to occur in the world’s premiere mixed martial arts organization, according to an April 7, 2020 ESPN MMA YouTube video titled, “Dana White talks UFC 249, Ferguson vs. Gaethje, securing an island for future,” the UFC president was asked by ESPN MMA analyst Brett Okamoto how we arrived to a Tony Ferguson vs. Justin Gaethje UFC 249 main event. According to White, “Obviously, everybody knows that the Khabib fight fell out." 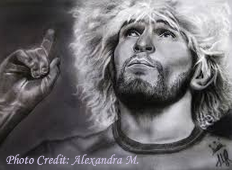 “You know, Khabib, and I could go on for 10-minutes telling you how that whole thing fell apart, but the reality is that’s nobody’s fault. Everyday when I got up the rules changed, everyday things were shutting down, things were closing down,” said White.

“You know, many people thought that this would be impossible for us to pull off. I’m always of the mindset that nothing is impossible, we’ll get this thing figured out. When there’s a will, there’s a way and he got caught up in Russia; um, it was a total mishap. You know, we all made mistakes in that one and nobody’s to blame for that. It is what it is,” explained White.

“Khabib versus Tony should be happening, but it should have happened five times ago,” said White. “So, I’m starting to believe Joe Rogan that this fight is cursed,” conceded White.

“I got a call today from Ali Abdelaziz,” explained ESPN’s Chael Sonnen in his April 3, 2020 YouTube video titled, “Let’s not blame Khabib….” As the former middleweight title contender went on to explain, “For any new viewers, he is the manager of numerous stars including Khabib and he said Chael, I just have to correct you on something,” explained Sonnen.

“He said, I saw a piece that you did and you had stated that there was something put out through Russian state media, which is true by me by the way, he said, that said that Khabib can leave Russia if he goes private. He takes a private jet, he can leave, whatever the rules, why ever that is, but he can leave if he goes private. He says Chael, a lot of people believe that, I had people with private jets reaching out to me saying we will get Khabib wherever he needs to go. He said, I have to tell you that’s not true information and regardless of where you read it, I’m going to let you know that’s not true. As a matter of fact, let me let you in on the way it is in Russia right now;  I found this so fascinating,” Sonnen explained.

“I said Ali, I’ve got to be able to tell people this. He said, go right ahead, I’m telling you so that you can tell people this and that you can have your story straight. So, the way it is in Russia right now every city is shutdown. Now, that’s not the way it is in America, we can go from city to city, we can even go from state to state, so it’s a little bit different. He goes, ‘No, no, every city is shutdown.’”

“And he said let me tell you what happened with Khabib. He said, Khabib was in San Jose training; San Francisco, which is right next to San Jose, San Francisco does a lockdown order of the city. Khabib made a reasonable guess that San Jose was going to be next and he heard that the fight was going to be in Abu Dhabi, so he goes to Abu Dhabi. While he is in the air, he gets news that Abu Dhabi was going to shut down. So Abu Dhabi lands him and won’t even let him leave the airport, he has to like stay the night in the airport, happened to have a hotel and then he fly’s into Russia and had to do like two days in the Russian airport, something along these lines and they had a hotel. So, then he gets out and guys come and grab him and go, ‘Hey, you can’t go anywhere,’ explained Sonnen.

“And they’re even following him through his cellphone, so Khabib had to go to where Khabib is and to where Khabib is still sitting right now which I assume to be Dagestan. He’s still training and doing all these different things; he has no ability to leave. And Ali said, ‘Look, I respect your show and I respect your facts, but I got to correct you on this one; wherever you got this information that said Khabib could leave if he went private, I’m here to tell you that source is false,’” recounted Sonnen.

The 800-pound gorilla in the room few seem to be acknowledging is who told Khabib the fight was going to be in Abu Dhabi? Judging by UFC president Dana White’s explanation of the events on the ground changing daily, it would seem the UFC itself obviously played a role in Khabib’s decision to leave the country based off tragically flawed information. And considering just how many times this fight has been scheduled only to fall through the ropes five times now, it’s obvious the man behind the curtain is manipulating the mechanisms of the combat sports entertainment industry.

And with combat sports across the board temporary suspended due to a coronavirus pandemic, entertainment in the MMA industry is in short supply. Displaying the kind of flare for the dramatic that stars are made of, Ferguson managed to capture headlines despite having the rug pulled out from underneath him once again. “Tony Ferguson will not fight Khabib Nurmagomedov or Justin Gaethje on Saturday night as was originally planned. But the UFC lightweight star says he still did a full weight cut and stepped on a scale Friday morning,” writes Marc Raimondi in his April 17, 2020 ESPN.com article titled, “Tony Ferguson cuts 24 pounds in 1 week despite cancelled fight.”

According to the report, “Ferguson made championship weight -- 155 pounds -- and showed the footage on Instagram. On a podcast Friday afternoon, Ferguson told ESPN's Ariel Helwani that he started the week at 179 pounds,” writes ESPN’s Marc Raimondi. While Ferguson provided MMA starved fans with something to talk about, the possibility exists this test run cut to 155-pounds could prove to have been a strategic mistake.

Although many in the mixed martial arts community come from a wrestling background where weight cutting is a way of life, the dangers of severe weight cutting in combat sports can lead to potentially disastrous consequences as the dehydration of shock absorbing brain fluid leaves athletes susceptible to concussions, brain bleeding, KO and even death.

“The human body is far more complex than a water bottle that we can empty and fill up multiple times. Human physiology is very complex,” explains a February 15, 2009 World Boxing Association article titled, “Dehydration and weight loss in boxers.”

According to the report, “A boxer is cheating his/her body if expecting a return to normalcy in one day, a claimed 24-hour period for recovery “just doesn’t hold water” by valid science. Just a rapid two percent loss of body weight impairs an athlete’s endurance by 20%, and robs strength, endurance, and motivation.” What role, if any, a second severe weight cut in less than a month will play on Ferguson’s performance against the perennial powerhouse Justin Gaethje is unclear, though the fates of other fighters in the past who have succumbed quickly to strikes after severe weight cuts has fueled speculation on the potential hazards associated with the practice.

“Then there’s that little thing called a fight,” writes author Scott Harris in his August 31, 2015 BleacherReport.com article titled, “Weight Cutting: Solving ‘The Biggest Problem in Combat Sports.’” According to the report, “A definitive study would be inhumane, but it’s widely accepted that dehydrated fighters run a higher risk of concussion. ‘When you’re dehydrated, the brain is smaller because there is less cerebrospinal fluid,’ Cantu said. ‘So, you can think of the brain having more room to bounce around the skull,’” explains Harris.

With UFC President Dana White acknowledging the UFC lightweight title fight between Khabib Nurmagomedov and Tony Ferguson as being cursed after repeated cancellations, the pattern of the weird, bizarre and out of the ordinary continues in mixed martial arts as last second opponent substitutions and potentially consequential weight cutting practices create a whirlwind of oddities leading up to the day UFC 249 finally occurs.

And if recent reports are to be believed, fans across the globe may not have long to wait either. “It looks as though UFC 249 will take place in ‘The Sunshine State,’” writes MMAFighting.com’s Mike Heck Jr. in his April 21, 2020 article titled, “UFC 249 pay-per-view headed to Florida on May 9.” According to the report, “UFC 249 was originally scheduled to take place April 18 in Brooklyn, N.Y., before it was moved to Tachi Palace Casino Resort in Lemoore, Calif. The event was officially postponed earlier this month due to concerns with the ongoing coronavirus pandemic.”

With all of the stars lining up to conveniently favor McGregor’s insertion into the lightweight title picture, it would no doubt be in Zuffa Boxings best interest if Justin Gaethje managed to defeat Tony Ferguson in route to setting the stage for a Conor McGregor showdown. With Gaethje’s most likely path to victory against Tony Ferguson being TKO or KO, Ferguson’s second severe cut within a month no doubt only increases the likelihood of just such an event occurring. For those paying attention to the position of the pieces on the board, the careful insertion of the very hittable Justin Gaethje into the lightweight title picture opens up some very interesting possibilities for the UFC and Conor McGregor in the combat sports entertainment industry where matchups make fights and perennial draws receive preferential treatment.