“Jiu-Jitsu,” explains MMA legend  Renzo Gracie, “has taught me that it’s better to live a day as a lion than a hundred years as a sheep.” It’s this alpha male, King of the Jungle mentality that ultimately led to UFC president Dana White recently making headlines and turning a few heads in the process upon the release of a compilation video of the various journalists and MMA media figures within the industry who put the knife in the back of mixed martial arts in lining up in capitulation against the organization for daring to continue to promoting UFC events during the early stages of the coronavirus pandemic lockdown. With the backbone of an invertebrate primate, a surplus of MMA journalists with an axe to grind snubbed their brown nose collectively at the U.S. Constitution and the streets paved of gold in the United States in encircling the UFC’s band wagon in an attempt to shut the sport down. 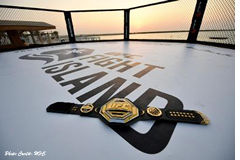 The culture of combat sports journalism lending itself to an environment where the education level of the average sports journalist isn’t particularly high to begin with and rarely relevant to the issues facing the sport today such as tyrannical, anti-American lockdown measures based upon scientific socialist principles parading under the veil of scientific medical necessity. With the career path in combat sports journalism uncertain at best, the sport found no shortage of brown-nosing journalists eager to fall in line with the Luke Thomas’s of the MMA world in leading the charge against the promotion to the impressionable masses. With longtime MMA figures such as Jeff Sherwood, the founder of Sherdog.com, even going as far as to play a very public role in having a UFC event postponed and cancelled.

“Anytime the MMA community turns on the MMA community it’s one of those weird ones for me,” explained the most interesting man in the world Chael Sonnen in his December 24, 2020 YouTube video titled, “Jake Paul beats Ben Askren?” Looking back on what could be considered one of the greatest betrayals in mixed martial arts history, Sonnen went on to reflect that, ”I can remember when Dana was getting ready to come back and make all of these rules, he’s going to move forward in the pandemic. He’s got a million precautions up and its going to be nearly an impossible task to carry out but this is what the plan is to do and the MMA media turned on him," recollected Sonnen.

“If the media had turned on him. If late night, John Oliver and Stephen Colbert want to have some fun with Dana, fair game. Have at it fellas,” said Sonnen. “When our own media turns on the industry, it’s just this weird and baffling thing. And I only bring that to you because you can’t trust your fellow brethren within MMA,” explained Sonnen with great tribulation. Not only can you not trust your fellow brethern within MMA, but if 2020 has taught us anything as the year draws to a much anticipated close, it’s that you should choose your company very wisely moving forward in the future as traditional American values such as liberty and freedom fall to the way side and find themselves under attack.

With literally tens of millions of fans across the globe subjected to near worldwide tyrannical lockdown measures following the proclamation of the fake coronavirus pandemic, the rallying of the troops within the combat sports media community in mass pressuring the UFC into shutting down at the height of the hysteria following the pandemic is a betrayal of the sport many won’t soon forget. While the freedoms and individual liberties that millions of Americans have fought and died for were being trampled on by totalitarian elements within the local, state and federal governments; those within the combat sports community were busy shooting themselves in the foot by supporting anticonstitutional lockdown measures in an effort to settle old scores and potentially put themselves in advantageous positions later down the road professionally by supporting the stripping of individual liberties, rights and freedoms of literally tens of millions of Americans across the country. In the process selling out their fellow Americans, the sport they cover and the legions of fans who they themselves rely on for support in giving credence to the legendary MMA pioneer Renzo Gracie’s words of wisdom that, “Jiu-Jitsu has taught me that it is better to live a day as a lion than a hundred years as a sheep.”