Editor's Note: The views and opinions expressed below are those of the author and do not necessarily reflect the opinion of the MMAPressRoom.com or its affiliates.

“It was kind of like the Wild West where I’m from,” explained UFC welterweight James Krause in a November 11, 2019 UFC.com article by Thomas Gerbasi titled, “James Krause Relishes ‘Ultimate Human’ Challenge.”

“I invested in myself, I invested in a couple other things, I bought a gym and it does really well,” admits Krause. “The UFC doesn’t owe me s**t. We’re in a business relationship and that relationship is, you pay me a good amount of money for me to bust heads.” 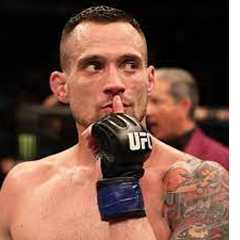 Now retired from professional mixed martial arts competition, today Krause enjoys significant UFC backing as his gym, Glory MMA, works with a number of combat sports athletes to include former UFC flyweight champion Brandon Moreno, who last competed back in July at UFC 277 where he picked up a TKO victory over the rugged Kai Kara-France.

“Under the watchful eyes of James Krause, an MMA powerhouse is being built in Kansas City, Missouri. With ten-plus UFC athletes on the mat at any time, Glory MMA has established itself as one of the most competitive training rooms in the world,” writes author Gavin Porter in his September 12, 2021 UFC.com article titled, “James Krause Answers New Calling at Glory MMA.”

With Krause and Glory MMA enjoying such a great relationship with the Ultimate Fighting Championship, it must have came as quite the surprise to the former UFC fighter upon learning that he had been suspended by the organization until further notice.

“My coach (James Krause), last night got pulled and they said the UFC was suspending him so he couldn’t be here in my corner,” explained bantamweight Miles Johns following his UFC Vegas 65 decision victory over Victor Morales according to a November 20, 2022 BloodyElbow.com article titled, “Report: Betting probe behind coach James Krause being pulled from UFC Vegas 65.”

"Krause has not been formally suspended," explains author Trent Reinsmith, "but he was pulled from the event because of the ongoing investigation into betting irregularities surrounding the November 5 bout between the Krause-coached Darrick Minner and Shayilan Nuerdanbieke.

“In the hours leading up to that fight," continues Reinsmith, "Nuerdanbieke moved from a -220 favorite to -420. U.S. Integrity, a company that investigates betting irregularities, caught the line movement and notified sportsbooks.”

“Wagering in mixed martial arts, specifically the UFC, has come under scrutiny as of late,” writes ESPN’s Marc Raimondi in a November 14, 2022 article titled, “UFC confidential: Inside the precarious state of betting on MMA for fighters and coaches.” According to the report, “Last month, UFC chief business officer Hunter Campbell announced in a memo to fighters that they and members of their teams, including coaches, are no longer allowed to place bets on UFC fights. The memo came after the UFC got guidance from state regulators and noted that in certain jurisdictions, it is a crime for fighters or coaches to bet on fights from leagues with which they are affiliated.

“Less than four weeks after that memo was sent out,” writes Raimondi, “a UFC Fight Night bout (on) Nov. 5 between Darrick Minner and Shayilan Nuerdanbieke came under investigation by U.S. Integrity, a Las Vegas firm, after several sportsbooks in multiple states reported suspicious wagering on the match. Nuerdanbieke won via first-round TKO after Minner appeared to suffer a left knee injury.”

Interestingly, “consensus in the MMA community around Nuerdanbieke vs. Minner is that many people became aware of Minner's knee injury in the hours leading into the bout.”

Speculating on how this information could have been possibly leaked, according to the report, “teams are big and hundreds of fighters, especially those based in Las Vegas, go to the UFC Performance Institute (UFC PI) regularly. People observe things and talk.

“‘I'm certainly not implying that the PI does anything unethical,’ one manager who has repped several UFC champions said. ‘But there are glass walls in there. I can be on the treadmill and I can see what's happening inside the physical therapy room.’"

While ESPN is busy taking up defensive positions in assuring its viewership audience that nothing unethical or otherwise occurred within the UFC's periphery, others in the mainstream media don’t appear to be as willing to make the same kind of concessions.

“There could have been some insider trading that was involved here,” writes Erick Richter in his November 8, 2022 NYPost.com article titled, “Suspicious betting on UFC fight that ended in first round sparks probe.”

"The aforementioned Krause," writes Richter, "Minner’s coach, does run a betting syndicate operation called the 1% club, where bettors pay him for his UFC betting advice. Whether that is actually insider trading is unknown."

“These days, gambling has been a huge source of income for the Newport News, Va., native — so much so that he’d be just fine living off it,” writes author Drake Riggs in his August 1, 2022 MMAMania.com article titled, “Newly retired James Krause: ‘I make more money gambling on MMA than I do anything else.’

“’I bet every single card just about every fight,’ Krause told The MMA Hour. ‘I have a Discord [server], like 2,000 members in it, we crush it. Last week, we destroyed it. I take over people’s accounts and play for them, I do pretty well. I make more money gambling on MMA than I do anything else.’”

With the idea of “suspicious wagering” at the heart of the UFC investigation, it would likely be a good idea to familiarize ourselves with some of the more obscure betting terms used throughout this report.“Line movement is sports betting slang referring to when the odds and/or lines change from the opening numbers set by the oddsmakers to the closing line at the start of any given game,” explains author Geoff Clark in his August 9, 2021 USA Today article titled, “Sports betting strategy: How to analyze line movement.”

According to the report, "Finding line movement is a lot easier than answering the question, ‘What caused the line to move?’ Discovering the reason(s) for said line movement is one of the many things that separate a professional sports bettor, or ‘sharp,’ from the ‘Average Joe.’”

“Being able to reverse engineer line movement," explains Clark, "is one of the most useful skills a successful sports handicapper can possess. Generally speaking, line movement is caused by one team or side of a total getting a majority of the bets. Oddsmakers will then move the line in an effort to entice bettors to take the less popular side and offset their liability for that game.”

With Krause running a Discord group where he has access to potentially thousands of accounts, it’s interesting to explore exactly how the line is moved in combat sports considering the scale and scope of this ”betting syndicate operation." All but confirmed by the previously cited ESPN report, the existence of a second, yet distinct Discord group suggests that the very real possibility exists that this betting syndicate operates in a much broader context than what has initially been reported. So as we reverse engineer this story in an effort to separate the sharp from the Average Joe's, sifting through the Discord reveals a world known as the 1% club, which is “kind of like the Wild West where I’m from.”