Treason as defined by the United States Constitution, "shall consist only in levying war against them, or in adhering to their enemies, giving them aid and comfort," and American sovereignty is jeopardized and directly under attack by the international scientific community through the auspices of the World Health Organization and the United Nations as they dictate the evisceration of the constitutional rights and freedoms of the American people. Differing little in terms of the consequences behind an actual invasion, unless Americans on both sides of the aisle pull their heads out of their asses and get their act together we’re going to lose our republic without a single shot ever being fired.

For those of us who haven’t been living under a rock lately, you will be keenly aware that the UFC’s own Joe Rogan recently invited CNN's Dr. Sanjay Gupta on his podcast to discuss the COVID-19 pandemic and efficacy behind vaccine mandates.

“Rogan, who tested positive for COVID-19 last month,” according to an October 14, 2021, USAToday.com article titled, “Joe Rogan, who says he was almost vaccinated, tells others ‘get vaccinated and then get sick,’” by author Scott Gleeson, “had downplayed the need for mass vaccines for large events like comedy shows earlier in the year. He hosted CNN Chief Medical Correspondent Dr. Sanjay Gupta, on his podcast, The Joe Rogan Experience, Wednesday to discuss the coronavirus and vaccines.”

“Gupta, who joined Rogan's podcast for three hours in an effort to reach Rogan's audience about the seriousness of receiving vaccinations,” was blasted during the interview in what has essentially become the shot heard around the world. "Rogan criticized CNN as 'dangerous,' according to the report, "for taking his COVID-19 treatment regimen out of context and 'lying about me taking horse medication.' His stance mirrors previous public statements about CNN when he threatened to sue the network.”

The “horse medication” in question, Ivermectin, has been a hot button topic among the talking heads in the mainstream media who have criticized it’s use in treating COVID-19 and its symptoms, preferring instead to push the idea of vaccines on the American people as the primary treatment method in dealing with the coronavirus pandemic. With Rogan having successfully recovered from COVID-19 after the use of Ivermectin, the rush was on from Gupta and his CNN handlers to attempt to discredit Rogan and the Ivermectin alternative in what essentially amounts to a battle for the hearts and minds of the American people.

Digging deeper into the situation in an attempt to put a cap on the potential catalyst and motivation behind CNN's attempts to chastise Rogan and Ivermectin, it didn’t take long to discover the smoking gun. According to a June 29, 2017 FredHutch.org article titled, “Former executives from CNN, Gates Foundation and Microsoft join Hutch board of trustees,” author Jonathan Rabinovitz writes that, “The new trustees — Robert Herbold, Phil Kent and Leigh Morgan — have served, respectively, as executive vice president and chief operating officer at Microsoft Corp.; chairman and CEO at Turner Broadcasting System Inc.; and chief operating officer of the Bill & Melinda Gates Foundation.”

CNN Worldwide is of course owned and operated by Turner Broadcasting System Inc., a division of AT&T’s Warner Media. And the Gates Foundation, who according a 2017 Golden Gate University School of Law report titled, “Accountability of International NGOs: Human Rights Violations in Healthcare Provision in Developing Countries and the Effectiveness of Current Measure,” where author Sharmeen Ahmad writes that, “In 2010, the Gates Foundation funded experimental malaria and meningitis vaccine trials across Africa and HPV vaccine programs in India. All of these programs resulted in numerous deaths and injuries, with accounts of forced vaccinations and uninformed consent,” has played an unusual front and center role in the coronavirus pandemic and the push for vaccines despite the fact Bill Gates himself has no formal medical training.

With Gupta being CNN’s chief medical correspondent, who showed up on the Joe Rogan Experience podcast to push a pro-vaccination agenda in light of Rogan’s successful Ivermectin treatment it’s interesting to note the connections between the owners of CNN, the Gates foundation and the Hutch organization, who according to their own website describes their researchers “as an important part of the international scientific community.”

The international scientific community of course being a euphemism for the World Health Organization, who according to the front page of their own website, “is the United Nations agency that connects nations, partners and people to promote health, keep the world safe and serve the vulnerable – so everyone, everywhere can attain the highest level of health.”

The Centers of Disease Control of course having a collaborating relationship with the United Nations’ World Health Organization according to the CDC.gov website itself, a fact which directly questions whether American sovereignty is jeopardized by the “international scientific community” considering the role the CDC plays in issuing COVID-19 guidelines to the American people to follow. 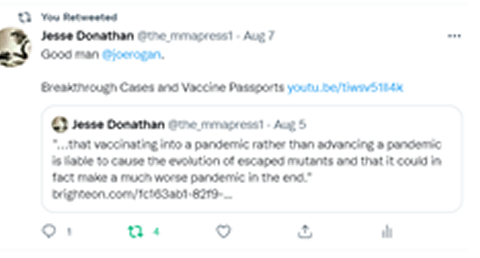 According to the report, “Together with Bill and Melinda Gates and Fred Hutch President Dr. Gary Gilliland, she toured the HIV vaccine lab and met with key scientists, including Nobel Prize-winner Dr. Linda Buck. Madame Peng, a World Health Organization goodwill ambassador, discussed opportunities for collaboration between US and Chinese researchers in vaccines for HIV, Ebola and other diseases, as well as innovative smoking cessation programs.”

In what amounts to yet another avenue in the fabled saga of all roads to the United Nations, confirming previous research conducted by the MMA Press Room, the fact we can connect Joe Rogan, Dr. Sanjay Gupta and by default CNN and Turner Broadcasting Systems Inc. to the Fred Hutchinson organization, the Bill and Melinda Gates Foundation, the World Health Organization, China and the United Nations is worthy of note to say the least. Especially in light of disturbing information surrounding the Biden administrations own connections to the Chinese Communist Party that paints a picture so ugly that most American’s are simply unwilling or unable to accept as their treasonous truth..

Having broken several Pulitzer prize worthy stories well ahead of the mainstream and alternative press, to include but not limited to martial law, invasion, communism in the United States and the United Nations war on America; the fact remains that the MMA Press Room stands out as an elite news organization with credentials to our name that are unmatched by practically anyone in the mainstream media today.

Adding to our ever-increasing list of journalistic accomplishments is this discussion itself, originating several months back now as the MMA Press Room first tackled the subject of vaccines on MMA Twitter in hopes of creating a snowball effect that inevitably reached the top of the mountain. Mission accomplished as UFC commentator Joe Rogan picked up the torch on the subject of vaccinating into a pandemic and who would ultimately go on to bait CNN’s Dr. Sanjay Gupta to step into the lion’s den where he was promptly devoured by the MMA communities own.

The house is burning down and unless conservative Americans pull their heads out of their asses and get with the program we’re going to lose our republic without a single shot being fired. At this very moment, American sovereignty is jeopardized and directly under attack by the international scientific community through the auspices of the World Health Organization and the United Nations as we discover treason as defined by the United States Constitution, "shall consist only in levying war against them, or in adhering to their enemies, giving them aid and comfort," has came to the shores of America.