Recently, in a July 27, 2019 YouTube video from former UFC middleweight contender Chael Sonnen titled, “Greatest women's MMA fight ever? Cris Cyborg vs Felicia Spencer...,” the retired mixed martial arts icon went on record as stating, “Alright, Cris Cyborg-Felicia Spenser, I think I might go as far as to say it’s the greatest female fight I’ve ever seen.” In Chael’s estimation, the question coming into the fight for Cyborg was how was she going to rebound following a knockout loss in a championship fight to Amanda Nunes? Cyborg, whose real name is Cristiane Justino, lost to Nunes at UFC 232 in December of 2018 in just 51-seconds in route to the first professional loss of her career. The seemingly unstoppable Cyborg stopped by the new kind on the block in devastating fashion. 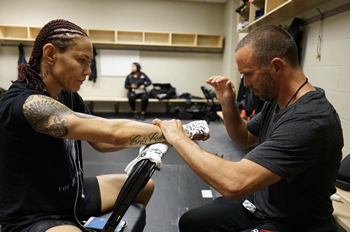 According to the ESPN MMA analyst, "But on Cyborgs end of things, how is she going to do coming off not only a loss, but a loss of a championship, a loss of main event status, and far more importantly a loss by knockout?"; Sonnen went on to elaborate, explaining, "Look, in boxing, guys will never recover. You'll hear Max Kellerman, you"ll hear Teddy Atlas, names that you would know and names you would very much respect and they will talk about when a boxer gets knocked out its over. It's all over. Because, the reason is, you are just in there questioning yourself. Can my chin take it, is this, can I take this punch? Is that punch going to catch me," etc. explained Sonnen in assessing the psychological aspects of taking a lights-out blow that can be career killers for some fighters.

The first round was marked with Cyborg suffering a cut on her forehead early in the fight, the sight of which almost seemed to be amusing to the legendary mixed martial arts fighter as she looked up to the big screen to assess the damage mid fight. Having a lot of respect for Sonnen, I actually took the time to watch this fight twice because I just couldn't understand where the Bad Guy Inc. CEO was coming from. The greatest women 's mixed martial arts fight of all-time? Surely you jest, sir?

Where Spencer seemed to shine against Cyborg throughout the fight was in the clinch, the wall-in-stall tactic forced Cyborg to exert a lot of energy in defending the near constant threat of a takedown while simultaneously having the added bonus of forcing Cyborg to carry her opponents’ weight, which is an exhausting, draining proposition that is frustratingly claustrophobic in its effectiveness.

When the fighters separated, Spencer displayed relatively good footwork in the standup department though her offense was minimal to non-existent at times, more akin to a deer in headlights than a competitive, offensive minded combatant. Cyborg would prove the more fluent, effective kickboxer in the cage, throwing multiple punch combinations in route to being the clear aggressor in controlling the Octagon. The first round was clearly a 10-9 score on this judge’s score card for Cris Cyborg, though Spencer proved to be a tough, durable fighter throughout the first period of action.

The second round started off with Cyborg working some legs kicks before one was caught by Spencer who drove Justino to the fence. Again, Spencer did her best work of the fight in the clinch in forcing a standup grappling match against the chain link fence. If this was the game plan coming into the fight, Spencer found limited success throughout the fight though failed to capitalize when it really counted every time unfortunately.

While working for an upper body takedown, her head a constant menace to Cyborgs posture, Spencer would display good fight IQ by working in some vertical elbows to give Justino something to think about while shrugging off the takedown attempts. I was impressed with how long Spencer was able to maintain the standing clinch position against Cyborg for as long as she did, Spencer was clearly imposing her will on Cyborg yet when the she finally got the fight to the ground unfortunately she was on her back where Cyborg looked to capitalize by reigning down a volley of effective punches that caught Felicia where it counted.

Eventually Cyborg would let Spencer back up, where again her lack of offensive intent was painfully obvious. Though Spencer still appeared capable after two rounds of action, she was lacking the pep in her step to really turn on the heat and it was clear fatigue was beginning to set in. Outclassed on her feet, it was another 10-9 round in favor of Cyborg.

The third round started off with Cyborg clearly being the fresher of the two fighters, piecing Spencer up early on.  Justino’s championship experience and technical striking advantage were on full display as the difference between a fighter and a champion began to become increasingly clear; Cris’s conditioning came through, simply enabling her to pull away from Spencer as time marched on. By the three-minute mark, Spencer had managed to put Cyborg up against the cage once again, working the clinch and stifling Justino’s offense. That would last only for so long however as Cyborg broke free and again began to lay it down on her Canadian counterpart.

Cyborg herself would pin Spencer up against the cage, her Chute Box Muay Thai background on unfortunate display for her outmatched opponent. The final minute of the fight saw Cyborg mercilessly stalk Spencer around the cage, throwing everything and the kitchen sink at her exhausted opponent who no doubt couldn’t have been happier to hear the sound of the final bell. It was another clear cut 10-9 round for Cyborg that saw her go on to win the fight by unanimous decision.

While not the greatest female fight of all-time, Spencer was a game fighter who put on a good showing despite being outmatched against a superior opponent. There are many athletes out there who have turned down a fight against Cyborg, and with Felicia only having one fight in the UFC prior to being matched up against perhaps the greatest female fighter of all-time in Cris “Cyborg” Justino it was certainly a performance for Spencer to hang her hat on. She just fought her heart out and went to a decision with the most legendary female fighter the sport has ever seen and she has pundits like Chael Sonnen singing her praises. In victory, Cyborg reportedly reaches the end of her contract with the UFC and becomes a free agent eligible to sign with a rival promotion should the worlds premiere mixed martial arts organization fail to re-sign Justino in an effort to make a rematch with two-division champion Amanda Nunes.